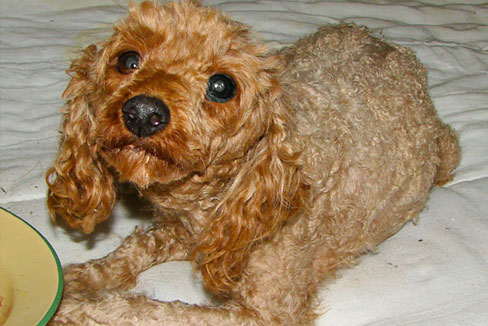 The cruel and systematic slavery of dogs imprisoned for life on puppy farms will be before the Kyneton Magistrates Court on Monday, 11th April, 2011. Patty Mark, President of ALV will face charges of trespass and theft of three dogs after she helped remove dogs in very poor condition for urgent veterinary treatment. Patty tells their story.

The call was urgent. A concerned member of the public had been tracking down this puppy factory for quite some time.  She found a lead and a local confirmed it and they also told her the dogs weren’t in a good way. She found out the puppy farmers were away on holiday. So she went to the property, saw the dogs and then rang us in tears begging for help.

ALV’s Open Rescue team was on the road in less than two hours. The woman’s appeals were urgent as she said the conditions of the dogs were shocking. On arrival at the property, the first thing we said to each other before our investigation was, “No dogs off the property… we will take video footage and photographs and then report it to the authorities.”  We’d been in court before over puppy factories and the system only recognises animals as ‘property’, not sentient individuals.  We also knew from over thirty years experience it would be hard to get the authorities to act, but we never lose hope. 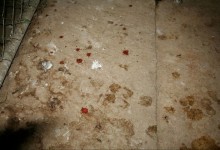 Blood-stains and filthy conditions of the shed floor

It was daylight when we arrived and before us was a well maintained large property with a huge double story new house, but up a small hill and away from the house, a large shed told a totally different story. The shed was cluttered and fitted out with wire cages on concrete, each holding a number of dogs. The floors of the cages were smeared with blood and feces. The dogs were either agitated and circling in their cage pens or cowering inside small kennels inside the pens. By now it was dusk and the shed was dim, but when our eyes adjusted, it was the pitiful conditions of the dogs that stopped us in our tracks. 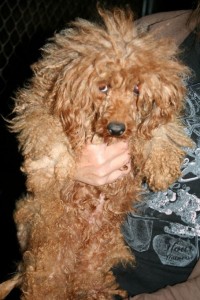 Tillie was in such a pitiful condition, her fur matted severely.

The dogs were very neglected, some were so matted you could not tell which end was which or even where their paws were. We filmed and photographed what we found, but we now knew that it would be impossible and morally wrong not to get some of these dogs to a vet as soon as we could. They were simply in too bad a state to turn away and leave them there.  We removed three of the worst but still ache over some we had to leave behind.

We reported the dog factory to the local council and the RSPCA and the puppy farmers reported ‘the theft’ to the police. There would have been a clean-up and movement of dogs before a cursory inspection.  And over a year later it is animal activists who face court for trespass and theft and I doubt the authorities have been back again to check on the dogs.  Who knows what these puppy farmers are now up to or what the conditions of any animals under their care may be?  There is no such thing as ‘routine unannounced inspections’ even on properties that are registered with local councils.

The vet was shocked the next morning when we presented her with the dogs.  She spent over two and a half hours treating them as much as she could in a general consult without anaesthetic. She rated them 1 – 1.5 out of 5 for condition. 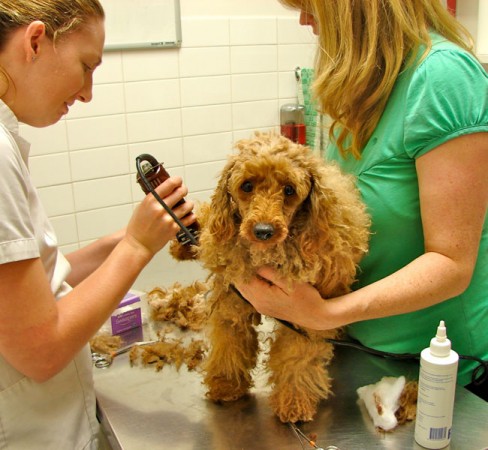 The vet shaving Tillie - she was visibly disgusted by their neglect

Besides being malnourished and underweight, their fur was so matted it had to be later shaved under anaesthetic. All three of the dogs also suffered dental disease, ear infections and embedded grass seeds.  The vet said in her report, “I was able to clip some of the matted hair on the dogs, revealing prominent rib cages due to the lack of subcutaneous fat covering their ribs. I was unable to clip much of the overgrown hair due to the extensive matting.” Download the Vet Report 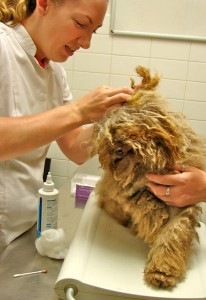 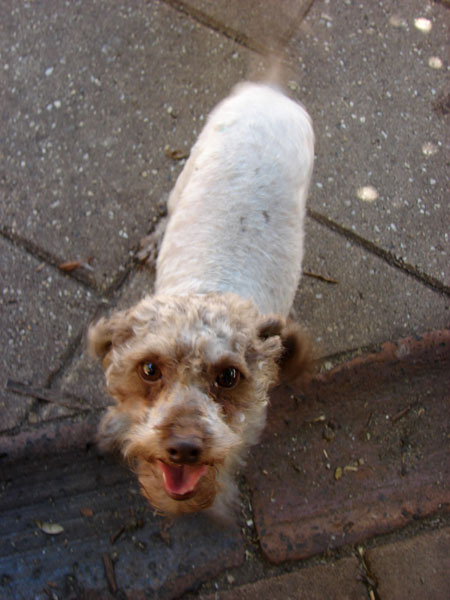 Waldo emerges from his shave a much happier puppy

All three dogs were neutered (as advised by the vet),  she said it was especially appropriate for the female as “underweight bitches are not fit to carry litters due to the extra strain imposed on the body by the pregnancy.”

Sadly one of the little dogs was seized by the police and returned to his abusers, but the other two are now far away and happily settled in new loving homes where they are treated as family members not as slaves locked away for some quick cash.

Click here to see the full gallery of images >