This is the story of Bo, one of the 13 traumatised dogs surrendered to Animal Liberation Victoria

When I first saw Bo she was frightened, anxious, intimidated and overwhelmed. She was so terrified and mistrusting of humans that when I first picked her up she urinated all over herself. The vet said Bo was around a year old and had already had a litter. In her brief life she had already been exploited, abused, and betrayed on every level. 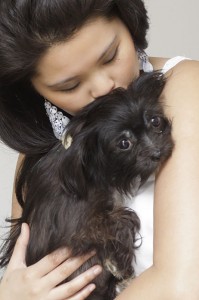 Jamie with Bo, who is slowly beginning to trust humans

Puppies and young dogs are usually healthy, energetic, sociable and mischievous balls of fluff, ready and willing to play – not little Bo. Bo was most likely born in a miserable and cruel ‘breeding establishment’. Dogs and puppies at puppy factories are kept in appalling conditions, sometimes the conditions are comparable to battery hen farms. Based on the puppy farms I have investigated, it is likely that Bo’s mother would have been imprisoned in a filthy pen covered with excrement and only seen as a profit making commodity. She would have been neglected and would not have received adequate food, water, exercise, shelter or veterinary care. Without concern or respect for a loving mother bonding with her newborn pups, Bo was stolen away from the safety of her mother and transported alone and scared to a pet shop to be sold.

We all know how excruciatingly painful it is to walk away and resist the adorable puppies for sale in pet shop windows. But when you purchase a puppy from a pet shop you are only perpetuating and enabling the cruel breeding at puppy factories. The person who wasn’t able to look after Bo properly had bought her from a pet shop believing she was ‘rescuing’ her. However, this increases demand and only enables the puppy factories to keep pumping out more pups to fill the empty space in the pet shop window. Pet shops are the public face of puppy factories and profit from the idea that puppies are property, not companions.

Bo has a heart murmur, her body is covered with scabs and she suffers severe hair loss from flea infestation. The vet wasn’t sure she would survive, but she is slowly healing and her fur is growing back. Bo has months of rehabilitation in front of her but each day there are little signs of improvement and she is even starting to show affection and loves a cuddle. Her favourite pastime is lying amongst the plants in the sunshine and eating treats.